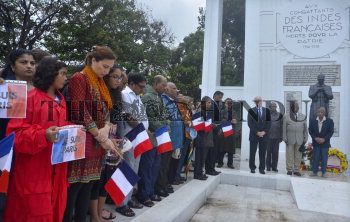 Caption : PUDUCHERRY, 15/11/2015: French Consul General Philippe Janvier-Kamiyama speaking at a memorial meeting at the French War Memorial on Beach Road in Puducherry on November 15, 2015 for the victims of Paris attacks. Photo: S.S. Kumar