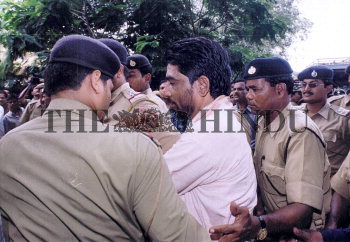 Caption : Picture shows Dara Singh, the prime accused in Australian missionary Graham Stuart Staines and his two sons murder case being produced at District and Sessions Judge court at Bhubaneswar on September 15, 2003. CBI convicted prime accused Dara Singh and 12 others for their involvement in the killing of Australian missionary Staines and his two sons in January 1999 in a tribal village in Orissa. The final judgement in case will be delivered on September 22, 2003. Photo: Ashoke Chakrabarty