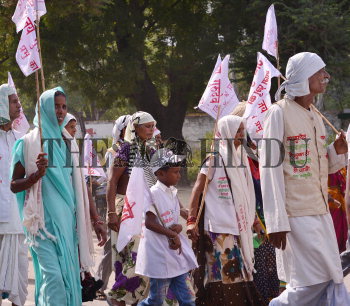 Caption : LUCKNOW, UTTAR PRADESH, 17/10/2015: SATSANG OF JAIGURUDEV: Thousands of followers of Jaigurudev, marching to the venue of SATSANG at Lucknow on October 17, 2015. Championing the cause of vegeterianism and non alchoholism, late Sant Baba Jaigurudev ji MAHAraj was born in a small village in Uttar Pradesh and has his Ashram in Mathura. Photo: Rajeev Bhatt