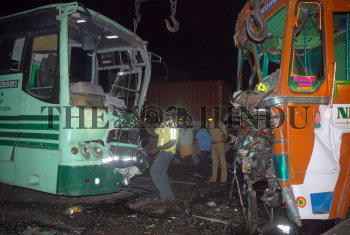 Caption : VELLORE, TAMIL NADU, 10/10/2015: The badly damaged lorry and bus after the collision in Konavattam in Vellore on October 10, 2015. Eight passengers of the Chennai-bound TNSTC bus sustained injuries when the bus driver lost control, and the bus broke through the central median and collided with the lorry coming in the opposite direction on the flyover in the Chennai-Bangalore National Highway. Photo: C. Venkatachalapathy