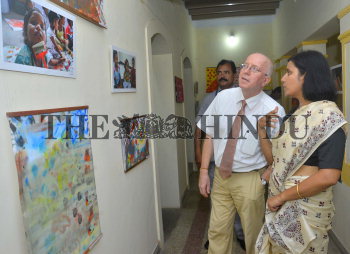 Caption : PUDUCHERRY, 09/10/2015: Philippe Janvier Kamiyama, French Consul General, looking at the exhibition of photos and paintings organised as part of 15th anniversary of Sharana in Puducherry on October 09, 2015. Rajkala, founder president of Sharana, is also in the picture. Photo: S.S. Kumar