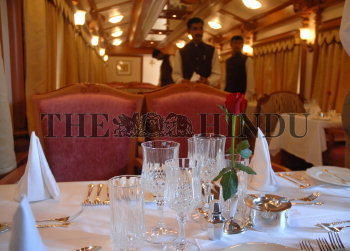 THA GOLDEN CHARIOT, THE GEM OF THE KARNATAKA STATE

Caption : BANGALORE, 02/02/2008: The interior of one of the two restaurants inside 'The Golden Chariot', the gem of the Karnataka State Tourism, which was flagged off from Bangalore on February 02, 2008. The fare is fixed for 350 US dollars per day. This is one among the few luxury trains in India and the first in South India. The Golden Chariot consists of thematically designed coaches including 11 passenger coaches, with each cabin fully equipped with modern amenities like wi-fi environment, plasma TV and attached baths. Starting from Bangalore, the train will cover Mysore, Kabini, Hassan, Belur, Sharavabelagola, Hampi, Aihole and Pattadakal, Badami and Goa terminating the week-long journey at Bangalore. Photo: K. Gopinathan