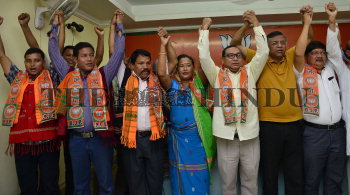 Caption : GUWAHATI, ASSAM, 07/10/2015: Tribal leaders from TIWA, Karbi and Bodo communities celebrates along with BJP's Assam state President Siddharth Bhattacharya (second from right) after they join BJP in Guwahati on October 07, 2015. There is a growing tendency among tribal supporters of the other political parties to join the BJP which has emerged as a major source of concern for the ruling Congress party in Assam as the Assam Assembly election is due on April 2016. Photo: Ritu Raj Konwar