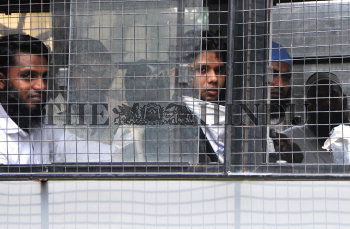 Caption : CHENNAI, TAMIL NADU, 05/10/2015: Police produced seven suspects,who were allegedly involved in the recent clash (on 25th September 2015) at the Puzhal Central Prison, before Magistrate Court at Tiruvottiyur in Chennai on October 05, 2015. Photo: B. Jothi Ramalingam