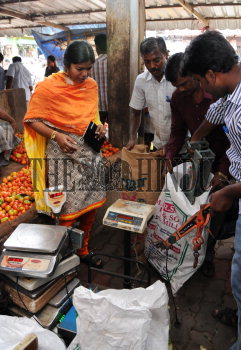 Caption : MADURAI, TAMIL NADU, 30/09/2015: Weighing machines and scales seized from vendors in Nelpettai on September 30, 2015, during a surprise raid conducted by the officials of Labour Department. Photo: R. Ashok