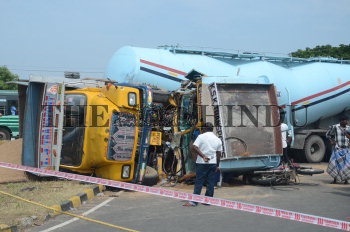 Caption : KANCHEEPURAM, TAMIL NADU, 28/09/2015: A multiple collision involving a tanker, a sand lorry and a two-wheeler led to a traffic snarl near Pulipakkam on (NH-45) GST Road near Chengalpattu on September 28, 2015. Though the lorry and two-wheeler were crushed beyond repair, no one was injured in the accident, say police. Photo: D. Gopalakrishnan