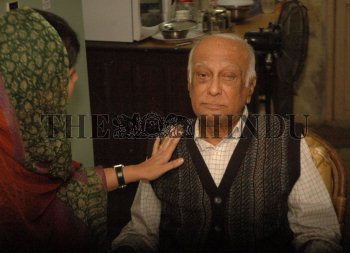 Caption : HYDERABAD, 31/01/2008: A relative tries to console Syed Abdul Ali Khan, FATHER of CRPF Additional DIG Syed Sirajuddin Ali Khan who was shot dead by a constable at his office at Chandrayangutta in Hyderabad, on January 31, 2008. Photo: Mohammed Yousuf