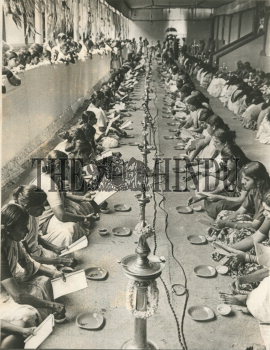 Caption : More than 200 people participated in the ten-day long 'LalithaSAHASRANAMA Kodi Archana' at the Attukal Bhagavathy Temple in Thiruvananthapuram, inaugurated by the SRI Ramakrishnasrama president, Mr. Sakrananda Swami (not in picture), on April 23, 1991. A book on 'Attukal Bhagavathy' was also released on the occasion by Mr. Suranad Kunjan Pillai (not in picture). The temple, one of the major pilgrim centres in the'State, is popularly known as 'Women's Sabarimala'. Every year, in March more than a lakh women participate in the Pongala festival at the temple. PHOTO: THE HINDU ARCHIVES