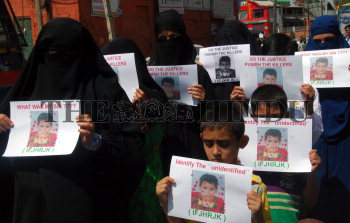 Caption : SRINAGAR, JAMMU AND KASHMIR, 20/09/2015: Kashmiri Muslims hold portraits of three-year-old Burhan Bashir during a protest organized by a human rights group in Srinagar, Unidentified Gunmen shot dead 3-year-old Burhan Bashir and his father Bashir Ahmed Bhat, a 36-year-old former militant when they opened gunfire on their home in the Sopore region late on 18 September. Bhat died at the scene, and his son died at hospital hours later on the call of separatist leader Syed Ali Geelani observed a shutdown to protest the killings. Photo: Nissar Ahmad