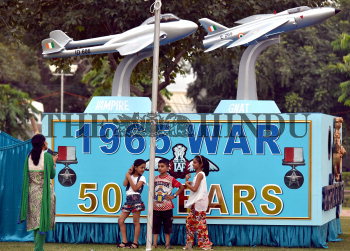 Caption : NEW DELHI, 14/09/2015: Children pose for the photograph in front of the installation of Mig-21 and other war planes which were used in 1965 India-Pakistan war seen during the media preview of 'Shauryanjali' an exhibition at Rajpath in New Delhi on September 14, 2015. Battle scene from Rann of Kutch in Gujrat to Haji Peer, Kargil, and parts of Pakistan during 1965 Indian-Pakistan war, created on major scale to give the feel of Indian Army and Air Force's mighty attack on Pakistan border, to mark Golden Jubilee of 1965 war. "' Shauryanjali" six day long exhibition at Rajpath will also showcase the important role played by CRPF, International Red Cross, Media, Prasar Bharati along with the armed forces. A documentary 1965 war and experience of veterans will also be shown during this exhibition. Photo: Prashant Nakwe.