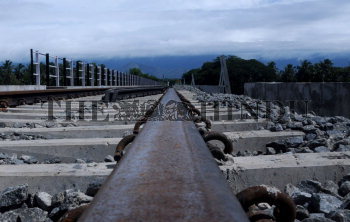 Caption : PALAKKAD, KERALA, 13/09/2015: Giving indications that trains would chug along the newly gauge converted Palakkad-Pollachi rail route by the end of October, Southern Railway authorities informed that the mandatory safety inspection of the route would be conducted by the end of this month. As per the existing plan, Railway safety Commissioner will reach Palakkad on September 23 to conduct the safety run under his direct supervision. A view of the track from Yakara near Palakkad. Photo: K. K. Mustafah