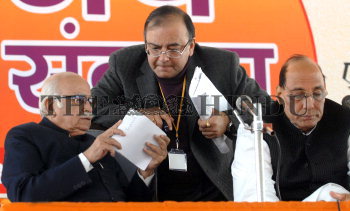 Caption : NEW DELHI, 29/01/2008: BJP leader L.K. Advani talking to the party general secretary and National spokesperson Arun Jaitley while having a look at the copy of the 'Political Resolution' after releasing the same, as party president Rajnath Singh looks on, during the party's National Council meeting, in New Delhi. Photo: S. Subramanium