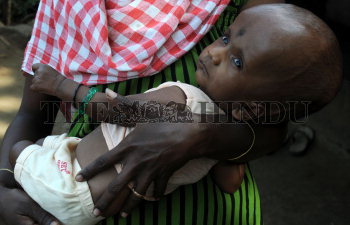 Caption : PALAKKAD, KERALA, 10/09/2015: One and a half years old Hemalatha, daughter of Dhanalakshmi and Senthil Kumar of Babu Colony in Muthalamada, is one among the 613 living child victims of banned killer pesticide endosulfan in Chittur taluk of Palakkad. Photo: K. K. Mustafah