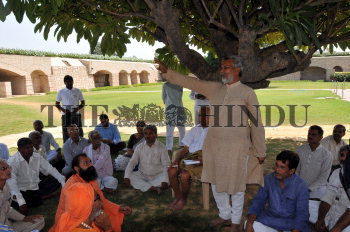 Caption : NEW Delhi, 05/09/2015: Rajendra Singh (standing centre), Water Conservationist addresses after paying homage at Gandhi Samadhi prior to start Vishwa Shanti Jal Yatra from Rajghat, in New Delhi on September 05, 2015. Rajendra Singh is a well-known water conservationist from ALWAR district, Rajasthan in India. Also known as "Waterman of India", he won the Stockholm Water Prize, an award known as "the Nobel Prize for water", in 2015. Previously, he won the Ramon Magsaysay Award for community leadership in 2001 for his pioneering work in community-based efforts in water harvesting and water management. He runs an NGO called 'Tarun Bharat Sangh', which was founded in 1975. Photo: Shanker Chakravarty