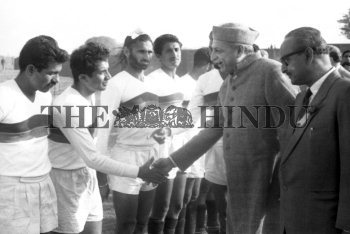 Caption : The Indian Olympic Association President's XI player Zulfiker being presented to the Mayor of Delhi Nuruddin Ahmed, before an exhibition football match between Red Stars Club of Zurich and the Indian Olympic Association President's XI at the Corporation Stadium in New Delhi on February 08, 1967. PHOTO: THE HINDU ARCHIVES