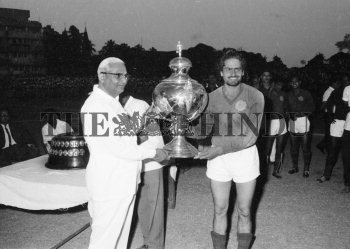 Caption : Mohun Bagan skipper Jarnail Singh receiving the winner's trophy from S.K. Wankhede, President of the W.I.F.A. Mohun Bagan defeated Vasco Sports Club in the final of the Rovers CUP football tournament at the Cooperage in Bombay on March 25, 1967. PHOTO: THE HINDU ARCHIVES