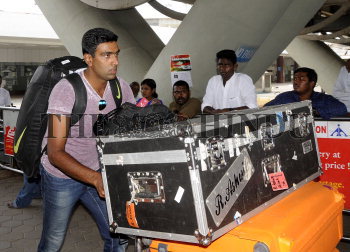 Caption : CHENNAI, TAMIL NADU, 02/09/2015: R. Ashwin snapped at Chennai Airport on his arrival from Sri Lanka after the Test series on September 02, 2015. His 21 wickets from three Tests in Sri Lanka won him his fourth Man-of-the-series award - only two Indians have done better - Sachin Tendulkar and Virender Sehwag. Photo: G. Krishnaswamy