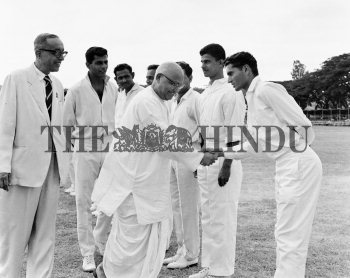 Caption : South ZONE cricket team members being presented to S. Nijalingappa, Chief Minister of Mysore, during the Duleep Trophy quarter-final cricket match between NORTH ZONE and South ZONE held on the CENTRAL College ground in Bangalore from October 23 to 25, 1965. PHOTO: THE HINDU ARCHIVES