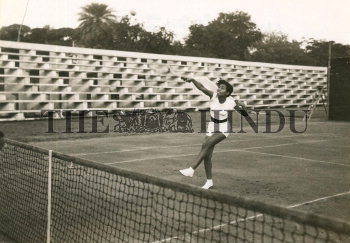 Caption : Rita Davar snapped during National Tennis Championships at the South Club, Calcutta on January 10, 1953. The diminutive woman tennis player from Bengal who is ranked No.1 in India, is in fine form this season. In all the major tournaments held in this country she has remained unbeaten in all the events she competed. PHOTO: THE HINDU ARCHIVES