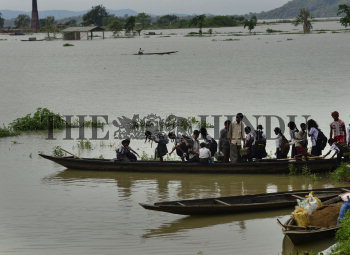 Caption : MORIGAON, ASSAM, 21/05/2015: School children get in to a boat after attending their school in the flood affected Morigaon district of Assam on August 21, 2015. Flash floods, triggered by heavy rains in the past few days, have affected nearly three lakh people in thirteen district of Assam state so far. The Brahmaputra River and its tributaries are flowing above the danger mark affecting many roads and bridges the affected districts. The flood situation in Assam turned grim following incessant rains in the catchment areas of Bhutan, Arunachal Pradesh, Meghalaya and Assam since last couple of days. Photo: Ritu Raj Konwar