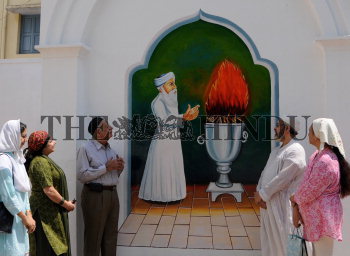 Caption : CHENNAI, TAMIL NADU, 17/08/2015: A reason to celebrate: A Parsi family offers prayers on the last day of their year, at the 100 year old Jal Phiroj Clubwala Dar E Meher, popularly known as Fire Temple at Mada Koil Street, Royapuram, a prominent northern locale in Madras, the capital city of the southern Indian State of Tamil Nadu, The Persian New Year, 'Navroze'. Which begins on August 18, 2015, traditionally marks the first day of spring. It is being celebrated for over 3000 years. The Indian followers of Zoroastrianism are called Parsis because the religion arrived in India from Persia. Our President Pranab Mukherjee quoted ''the Parsi community of India has immensely enriched the country and contributed enormously to its prosperity and welfare. "Navroz represents new beginnings. May this festival bring happiness and prosperity to all and inspire us to spread the message of amity and goodwill far and wide" Photo: B. Jothi Ramalingam