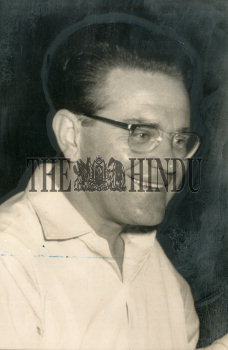 Caption : The Easily the most popular Wimbledon champion of post-War years, Jaroslav DROBNY has been playing championship tennis in all parts of the world for over 20 years. His knowledge of the game and its leading personalities, many of whom are his friends, is absolutely unrivalled. Photo taken, during the South Indian Tennis Championship tournament in Madras on February 10, 1957. (Published in Sport And Pastime on May 02, 1959). PHOTO: THE HINDU ARCHIVES