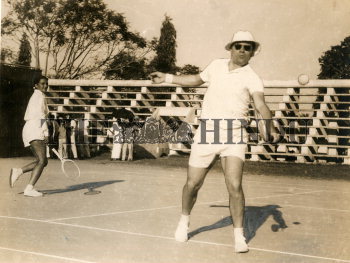 Caption : J. DROBNY playing in a mixed doubles match in the South India Tennis Championship at the Egmore Tennis Stadium in Madras on February 07, 1957. DROBNY and Mrs. K. Singh (left) beat Jayasurya and Miss Dechu Appiah 6-0, 6-1. (Published in The Hindu on February 09, 1957). PHOTO: THE HINDU ARCHIVES