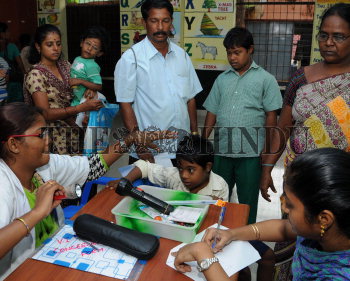 Caption : CHENNAI, TAMIL NADU, 07/08/2015: Nearly 286 children attended a special camp organised by SSA at the Chennai Corporation Middle School, Thiru Vi Ka Nagar, in Chennai on August 07, 2015. As a precursor to the event, the staff held an awareness rally and made announcements from an autorickshaw that went through various neighbourhoods. “We had 75 more children than last year and we are happy with the response,” said Santhalatha, special educator, SSA. Nearly 150 children were given ID cards; 64 received ortho appliances such as wheel chairs and tri-cycles; and 32 received hearing aids. Photo: B. Jothi Ramalingam