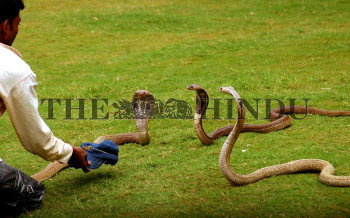 Caption : HYDERABAD-24/01/2008: REPTILE CONSERVATIONISTS of Greater Hyderabad Society for Prevention of Cruelty on Animals (GHSPCA) handling aggressive full grown spectacle Cobras spreading their hoods. They were rescued from snake catchers in Toopran, a suburb of Hyderabad on January 24, 2008. In a painful procedure for Cobras, the catchers extract venom and sell it reportedly for Rs 500 (from each snake) to prospective buyers. Capture of cobras and the business of selling venom goes on despite their protection under Wildlife Protection Act of 1972, according to a volunteer of GHSPCA, Giridhar Gopal. Photo: Mohammed_Yousuf