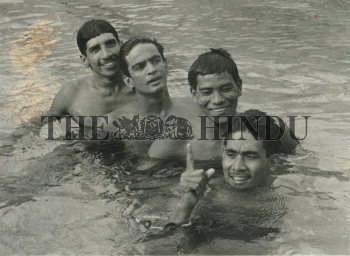 Caption : The Central Reserve Police Force (CRPF) team that finished first with a new meet record in the 4x200m freestyle relay event of the All-India Police Aquatic Meet at the Talkatora Pool in New Delhi on August 17, 1992. From left - Pradeep Rana, Khajan Singh, Premjit Singh and Ranjeet Singh. (Published in The Hindu on August 18, 1992). PHOTO: THE HINDU ARCHIVES