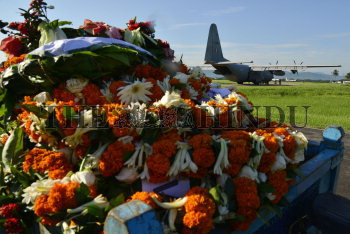 Caption : GUWAHATI, ASSAM, 28/07/2015: An Indian air force Hercules aircraft waits along with the body of the former president of India APJ Abdul Kalam ready to depart to Delhi at Guwahati air force base on July 28, 2015. India's 11th President APJ Abdul Kalam died on 27th July 2015 evening at the Bethany hospital in Meghalaya, where he had gone to deliver a lecture. He was 83. The former President, who was in office from 2002 to 2007, had collapsed during the lecture at the Indian Institute of Management, Shillong, capital of Meghalaya state around 6.30 pm on 27 July 2015. He was taken to the Bethany hospital where doctors said he had suffered from a massive cardiac arrest. Photo: Ritu Raj Konwar