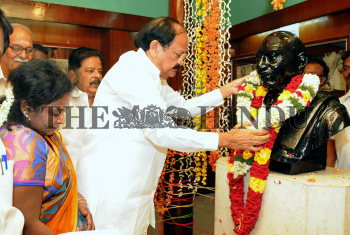 Caption : VIRUDHUNAGAR, TAMIL NADU, 15/07/2015: Union Minister for Parliamentary Affairs M. VENKAIAH NAIDU garlands the bust of K. Kamaraj at his residence which has been converted into a memorial in Virudhunagar on July 15, 2015, on the occasion of the late Chief Minister's 112th birth anniversary. Photo: G. Moorthy