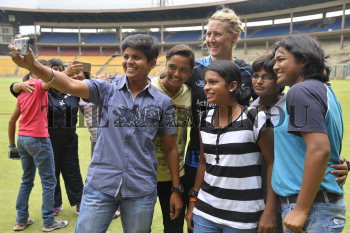 Caption : BENGALURU, KARNATAKA, 11/07/2015: New Zealand's Sophie Devine poses with fans and young local cricketers after her record-breaking knock during the first match of the Twenty20 International women's series against India at the M. CHINNASWAMY Stadium in Bengaluru on July 11, 2015. Devine smashed the fastest fifty ever in a women's T20 international, her 18-ball effort eclipsing the previous record of 22 deliveries. Devine was eventually out for 70 (22 balls), helping the Kiwis defeat India by eight wickets. The 25-year-old is a multi-talented athlete and has also represented New Zealand in hockey. "There were a few hockey swings out there," she said after her innings. Devine, who was diagnosed with diabetes at the age of 15 and takes five insulin injections daily, is an active campaigner with Diabetes Youth New Zealand, spreading awareness among children and young adults. Photo: K. Murali Kumar