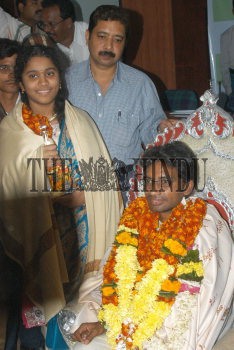 Caption : VISAKHAPATNAM, 21/01/2008: NLN Anusha who won the silver medal in the 21st National Chess under-13 being felicitated by the Additional Commissioner (Income Tax) Jayakumar at a function in Visakhapatnam on January 21, 2008. Photo: C. V. Subrahmanyam