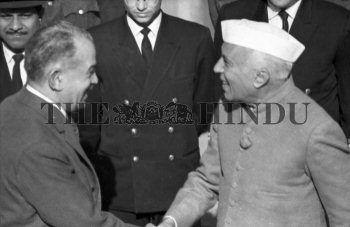 Caption : Mr. Ali Sabry, Chairman of the Executive Council of U.A.R. arrived in New Delhi to join the talks now being held to discuss the peace proposals of the non-aligned nations. Mr. Sabry with Prime Minister Jawaharlal Nehru who met at the airport on January 12, 1963. Pictures showing the arrival of Mr. Sabry and being received by Mr. Nehru. PHOTO: THE HINDU ARCHIVES