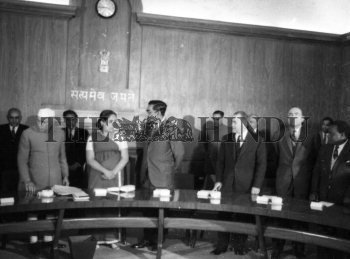 Caption : Mrs. Sirimavo Bandaranaike, Prime Minister of Ceylon, Mr. Ali Sabry, President of the Executive Council of the U.A.R. and Mr. Kofi Asante Ofori Atta, Minister of Justice of Ghana, held discussion with the Prime Minister Mr. Jawaharlal Nehru and other Ministers of the Government of India, in New Delhi on January 12, 1963 on the Colombo Conference proposals to end the Sino-Indian conflict. PHOTO: THE HINDU ARCHIVES