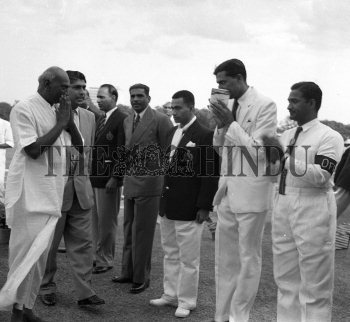 Caption : S. Balakrishna Shetty, I.G. of POLICE, presents his officials to the Chief Minister K. Kamaraj, who greets them with folded hands in the Madras State POLICE SPORTS MEET held in connection with the Madras POLICE Centenary celebration at the Rajaratnam Stadium in Madras on September 02, 1959. PHOTO: THE HINDU ARCHIVES