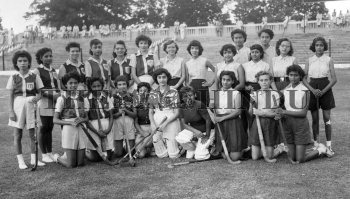 Caption : A combined group photograph of the Madras and Mysore teams taken before the match between the two teams in the Inter-Association women's hockey championship at the Stadium in Madras on July 16, 1955. PHOTO: THE HINDU ARCHIVES