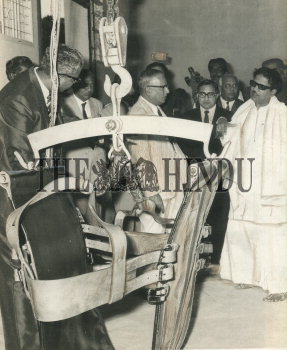 Caption : The Chief Minister M. Karunanidhi, who formally inaugurated the Madras Race Club Equine HOSPITAL AND Analytical Laboratory at Velachery, near Guindy in Madras on January 13, 1971, looks at a special hoist used in the operation theatre. (Published in The Hindu on January 14, 1971). PHOTO: THE HINDU ARCHIVES