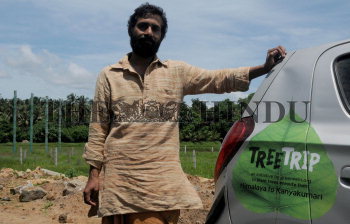 Caption : PALAKKAD, KERALA, 11/06/2015: Swami Samvidanand on the way to Palakkad. Though a Sanyasin who started following the path of renunciation at an early age, Swami Samvidanand looks extremely ambitious about his new mission to plant one billion trees in all districts in the country in another 21 years. After successfully launching the first phase of the tree cultivation drive on the banks of River Ganga in Haridwar and Rudraprayag in Uttaranchal, the green man with a spiritual bend of mind has reached Attappady to begin another phase of the mission on the banks of River Bhavani, which originates in Kerala to flow east ward to become the second largest river of Tamil Nadu.  Photo: K. K. Mustafah