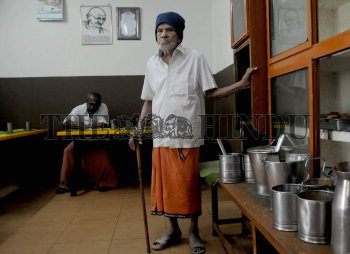 Caption : PALAKKAD, KERALA, 09/06/2015: A 102-year-old Madhavan Nair manages the restaurant sree sakthivilasam, Edathara near Palakkad on June 09, 2015. Madhavan Nair went to Thanjavur to work with a restaurant as HELPER of the chef. After learning the secrets of Thanjavur culinary skills, he returned to his native Akathethara in Pallakkad to start his own modest restaurant 80 years ago. The restaurant gives a mix of Thajavur and Kerala traditions of food. Now it is a favourite of vegetarian food lovers in the region. Even at the autumn of his life, Madhavan Nair manages the restaurant effectively and doing works such as cleaning and serving. Photo: K. K. Mustafah