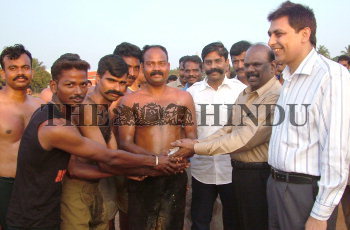 Caption : TIRUCHI:17/01/2008:VICTORY SMILES: The Inspector General of Police, Central Zone, I. Raja, handing over a prize to the team that won the slippery pole climbing event organised on January 17, 2008 in connection with the Pongal festival with prizes. At right extreme is the Commissioner of Police Shankar Jiwal. Photo: R. M. Rajarathinam