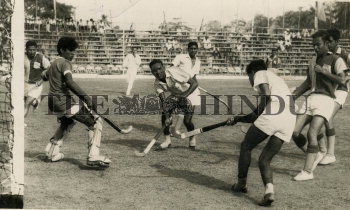 Caption : Hyderabad centre-forward Mohammad (third from right) scoring the first of the three goals which gave him a hat-trick against Goa in the National Hockey Championship held at Madurai on March 09, 1967. (Published in The Hindu on March 11, 1967) PHOTO: THE HINDU ARCHIVES