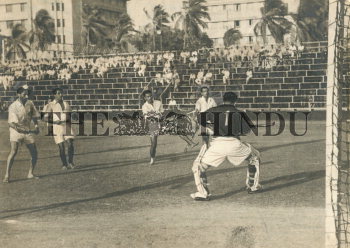 Caption : Sahasrabhude, Madhya Bharat goalkeeper, bringing off a save in the match against Bengal, on April 03, 1958 at the Bombay hockey stadium. Bengal won the match by five goals to one in the National Hockey Tournament match between Madhya Bharat and Bengal at Bombay. (Published in The Hindu on April 07, 1958) PHOTO: THE HINDU ARCHIVES