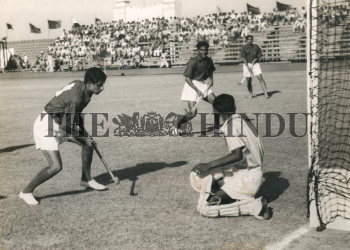 Caption : Delhi defeated Andhra by the big margin of eight goals to one. V.M. Mahajan, the winners' centre-forward, who took credit for the first hat-trick of the championship, is seen sending the ball in past the helpless goal-keeper in the National Hockey Tournament match between Delhi and Andhra at Jullundur on April 30, 1956. (Published in The Hindu on May 03, 1956) PHOTO: THE HINDU ARCHIVES