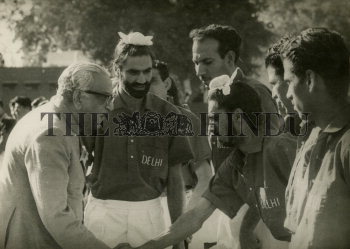 Caption : Delhi players being introduced to the Union Education Minister, M.C. Chagla, before their match against Kerala on the opening day of the National Hockey Championship at New Delhi on February 25, 1964. PHOTO: THE HINDU ARCHIVES