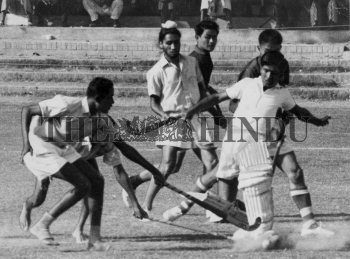 Caption : Assam goalkeeper Chandra Gyan fighting against odds to stem the spirited Hyderabad attack. Here he is making a save kicking the ball away from the opposing centre-forward Mohammed in the National Hockey Championship held at New Delhi on March 06, 1964. Hyderabad won by five goals to nil. (Published in Sport and Pastime on April 25, 1964) PHOTO: THE HINDU ARCHIVES