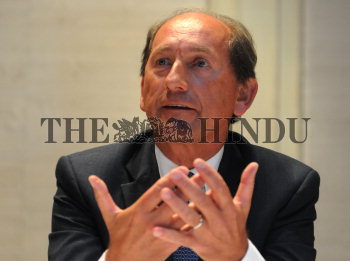 Caption : NEW DELHI, 05/06/2015: Paul Bulcke, Global CEO, Nestle, at a press conference on Maggi Noodles issue, in New Delhi on June 5, 2015. Paul Bulcke maintained that Maggi noodles are safe for consumption. He said Nestle has temporarily decided to pull the product off the shelves in India in view of the recent developments and concerns around the product, which have led to an environment of confusion. He said restoring consumer trust was the company’s priority. After samples of “Maggi” noodles manufactured in March 2014 were reportedly found to contain high lead content and Monosodium Glutamate (MSG), the instant noodles brand in under scrutiny by various state governments and Union Consumer Affairs Ministry. Nestle India faced the heat from all corners on June 3, 2015, with its two-minute noodle brand ‘Maggi’ banned for 15 days in Delhi and the Centre moving the National Consumer Disputes Redressal Commission. The Tamil Nadu, Gujarat, Uttarakhand, Jammu and Kashmir, and Assam have also banned the sale of Maggi. Photo: Kamal Narang