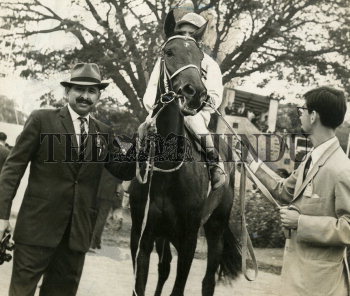 Caption : Venus De Milo (Duffy up) winner of the Turf Invitation Cup at Bangalore on July 19, 1969, being led into the paddock after the triumph by Mr. S. M. Ruia (Joint Owner) (left) as trainer Uttam Singh, looks on. (Pubd. in The Hindu on July 21, 1969) PHOTO: THE HINDU ARCHIVES