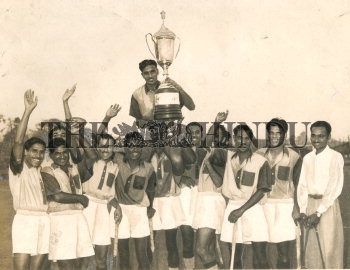 Caption : Bhola, captain of the victorious Services team, holding the Rangaswami Cup aloft while the other members of the team demonstrate their happiness. Services beat Uttar Pradesh in the National Hockey Championship by four goals to nil in the replayed final at Calcutta on February 24, 1960. (Published in The Hindu on February 27, 1960) PHOTO: THE HINDU ARCHIVES